Gaia and the Falcon

Gaia
and the Falcon…

Hi Everyone!! 🙂
Ok so I had a very different experience this
morning…  I was sitting on my bed and thinking about stuff going on in my life
when I realized I was rocking… and I immediately thought… oh heck no!!!  I
called in Archangel Michael and asked him to please clear me, protect me and not
allow anything to jump inside me that I dont first request… like for a reading
for someone.  But yet here I was still rocking… and feeling this swirling
energy.. funny but it felt round.  Then Gaia started talking to me.  She told me
that I needed to go to Walden Pond… that it was in trouble.  This is one of my
favorite places to hike and be… I feel such peace here. 🙂  It’s also where a
falcon swooped down and landed on a nearby branch.  I have since learned when I
woke up one morning that the falcon is my animal spirit guide.  But I’ll explain
that in a bit…
Gaia (Mother Earth’s Spirit) told me that I
needed to go to Walden Pond and put crystals in the ground around the lake.  And
to infuse them with loving energy.. and to keep them in the ground.  She said
that someone put something in the woods of Walden pond to destroy the trees.
This person wants the area for condo’s. I remember on my many hikes there
thinking that something was eating at the trees and so many looked like they
were just going to topple over.  The bases of them were void but yet the trees
still stood.   I started thinking this has to be just me.. I said.. “This is a
state forest.. condo’s can’t be built here.. it’s protected land”.  She
proceeded to tell me that the land and it’s trees will be decimated in a decade
and it will be open to this type of transaction.  I asked if I could bring help
and she told me yes (or at least I think so).
Now I
kept thinking it’s just me..  State forest land is protected isn’t it?  Condo’s
cant be built… can they?  The state wouldn’t sell off a portion, would it?  So
Im sitting here and thinking about everything I was just told and I tell her
that I need a sign that what Im hearing is from her and not just my own mind.  I
thought I had no doubts left in this regard… but this experience was very
different.. and I’ve been told that if we ever need validation, to ask for it.
So I did.  I asked for a sign by days end…   In this instant I was shown in my
mind the walk I took many months ago where I had placed sage at the base of some
trees while I was walking.  I had done this to give back to mother earth.  An
Indian friend had told me that I should leave something at the base of a tree
along my path and thank Gaia for protecting me on my hike.  I did this with many
trees along my hike and it even rained that day.. but I kept going.  I remember
this clearly.. and after this I was shown a vision of taking dry sage and
crumbling it in my hands and spreading it at the base of many trees during my
time of inserting crystals into the ground.  It was clear as day.  So now Im
thinking Im losing it but knowing deep inside Im not.  I call my friend Kellie
and tell her about this and her instant response is ,  “just do it!”   How
simple!  Of course it has to wait till Spring and warmer ground… but Im going
to do it.. and Kellie is going to help me.  I will ask a few others.. as there
was a reason I was so drawn to this place last year… it was like I HAD to be
there some days… and when I was.. there was instant peace. 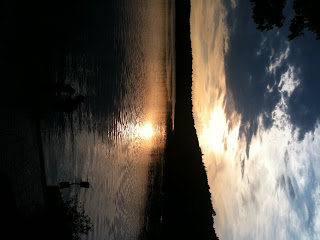 This is a pic of a sunset I took after hiking at
Walden Pond one day
I told Gaia that I know Im working on
trusting and should just have blind faith.. and I do for the most part.. but I
still wanted a sign from her that it was truly her connecting with and through
me.  I guess Im wondering… “Why me?”  But if the energy I feel flow through me
can flow just as strongly into the ground through me and whoever else joins
me… maybe we can save those trees and stop whatever plans are being made to
destroy such an incredible place.  I would lose a piece of me if that place were
gone. Maybe that is the point… we can lose who we are if we lose sight of that
which is most important to our survival.  We are all connected…
The falcon….  now that is a beautiful
bird!! HUGE and beautiful.  The one I saw had more tannish coloring,  but I
could tell by the beak that it was no ordinary bird… at first I thought maybe
an eagle.. but knew in my mind it wasn’t.  Then the word falcon came to me.  I
didn’t even know falcons were around here… but yes indeed they are.  They have
been seen at Walden pond. 🙂   I remember this bird swooping in and landing
above me… on a dead branch.  I was with my friend Doris.. and it just stared
at us.  I was standing there in awe and then trying to get my phone on zoom to
get a pic!!!  You know me and pics. 🙂  But it flew away…  I had not thought
another thing about it till the other morning.  I had woken up but was still
hazy.. in and out of sleep, and saw Jesus standing at the foot of my bed with a
dove in his hands… and in the next instant there was a bird on my thumb… and
it bit me. It wanted my  blood.  Then it was gone. This was a large bird.. light
colored on it’s belly but darker on it’s back.. and a curved beak. I woke up
right away and thought… “Now Im seeing birds???”  Not the fact that Jesus was
there.. but the birds! ha ha  I emailed my teacher E, and asked her what this
all meant.  She told me that the dove was me.. and I was being set free.  And
the falcon was my animal spirit guide.  He drew blood as a way of bonding with
me.   After the vivid dreams I had been having… the dove made sense… I was
taking back my power and was being freed from all that I had allowed to hold me
back.  The falcon…  and being my animal guide now…  I just think that is way
cool!!!  And the fact that one resides at Walden Pond… maybe that alone is all
the answer or sign I need.  🙂
Sometimes the answers we seek are right in
front of us…….
Have a wonderful day
everyone…
***Angel Blessings***
Sally

PS…..  a friend of mine that I hadnt heard from in a
looooong time just texted me and said he’d been thinking about me and Walden
Pond (or Walden Woods as he calls it).   Think I just got my sign 🙂